Editorial Reviews–Lost in the Beehive 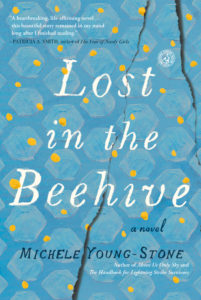 One of O Magazine‘s “Best New Books of Spring”

“Young-Stone is the rare writer who, like her characters, is able to perceive the magic in the world, even when the world is not spinning in the right direction. Through her novels—Lost in the Beehive, as well as her earlier Above Us Only Sky and Handbook for Lightning Strike Survivors—Young-Stone manages to show how even terrible experiences can, and often do, have a beautiful side. . . .  Lost in the Beehive forces readers to examine their own notions about what is ‘good’ and ‘right.'” —The Los Angeles Review

“In Lost in the Beehive, Young-Stone delves into the depth of the self, how we can excavate our true souls and how we can encourage joy, once the excavation is complete.” —News & Observer

“Themes such as hetero-normativity, male entitlement, and systemic misogyny are at constant play. . . Young-Stone’s words cut to the quick. . . . The novel’s heroine, Gloria Ricci makes many mistakes, but learns from them and carries on. This is good a reminder for our community: We will struggle to find who we are, but we must keep going.” —Edge Media Network

“Lost in the Beehive is a compulsively readable novel filled with colorful characters who practically leap off the page. The author’s writing is lyrical and evocative, making me feel as though I had been transported back in time to the 1960s.” —All About Romance

“Lost in the Beehive is a gripping and memorable novel about a lesbian woman’s quest for her true destiny. Smartly structured, laced with Toni Morrison like moments. Highly recommend.” —Elaine Neil Orr, author of Swimming Between Worlds and A Different Sun

“Michele Young-Stone’s Lost in the Beehive is a tender, desperate portrait of teens branded as defective in the most critical aspect of their identities, and during the most critical years of their lives. Though she is buffeted by love and loss—and haunted by bees—Gloria doggedly chases acceptance and a sense of family. She’s a believable character that adults and YA readers will cheer for and mourn with, and I recommend that you give Lost in the Beehive a try.” —Historical Novel Society

“This is a moving story of a young woman trying to discover who she really is and how hard life can be in the meantime.” —The Oklahoman

“A heartbreaking, life-affirming novel that champions the radical notion that to embrace our truest self is the one thing we can do to save ourselves. These characters and their lives and this beautiful story remained in my mind long after I finished reading.” —Patricia A. Smith, author of The Year of Needy Girls

“Lost in the Beehive illuminates a timeless and universal lesson: life is brutal, but love redeems, and the only way through it all is truth. With an unforgettable main character and a beautiful big heart, this novel delivers what Michele Young-Stone does best: an opportunity to see directly into another soul. Not with artifice, or with sentimentality, but with glorious wit, and uncompromising compassion.” —Lydia Netzer, author of How to Tell Toledo From the Night Sky

“Young-Stone has spun a romantic and magical yarn.” —Booklist

“Emotionally rewarding…Readers’ hearts will ache for Gloria as she strives for courage, self-realization, and, ultimately, the freedom to love and be loved.” —Publishers Weekly

“Young-Stone’s message is a strong one: do not deny your self…[A] mystical love story.” —Kirkus Reviews

Editorial Reviews-Above Us Only Sky 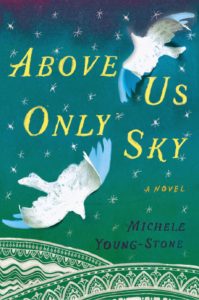 “Above Us Only Sky is a raw, beautiful, unforgettable book that folds unfathomable horrors and unfathomable love into a story of incredible power. Young-Stone is a master writer, and her deft control of this novel’s many moving pieces puts her in the highest echelon of our craft. Yet at the center, literal and figurative, of this novel is a story so brilliantly simple and deeply moving, you’ll forget you are reading a book. This story shook me to my core, and I can’t wait for the rest of the world to experience it.”
—Lydia Netzer, bestselling author of Shine Shine Shine and How to Tell Toledo from the Night Sky

“Rich with themes of love and loss. Young-Stone has spun a beautiful tale on the cusp of magical realism, but with 100% pure magical prose.”
—Heidi Durrow, New York Times bestselling author of The Girl Who Fell From the Sky

“The beautiful prose in Michele Young-Stone’s Above Us Only Sky flies off the page. A stirring meditation on resilience, the ties that bind us to our past, and what it means to have wings.”
—Tracy Guzeman, author of The Gravity of Birds

“Young-Stone has written a novel that’s both fanciful and brutally realistic, soaring as it does between angelic beings and heartless dictators. From America to Lithuania, from past to present, this is a heart-wrenching tale for literary fiction fans and particularly for readers interested in World War II.”
—Library Journal

“A gripping, heartwarming tale that affirms the strength of family connections despite tragedy, time and separation.”
—Bookpage 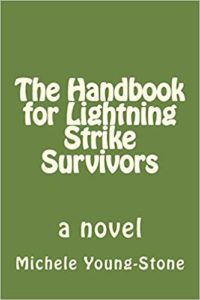 “[N]othing in this novel is predictable, which is one of many reasons that it’s a delight. Young-Stone has written an exceptionally rich and sure-handed debut, full of complex characters, brilliantly described. . . . [H]er style certainly has an electric immediacy.”
—Boston Globe

“Like a modern fairy tale, The Handbook for Lightning Strike Survivors shows the reader how to survive the inevitable; its magical coincidences are both possible and impossible, beautiful and tragic.”–Blackbird

“A cast of good and bad characters and the interplay of human aspirations and chance. As with Dickens, life is a battle of survival here as well as a journey of understanding. . . . [Young-Stone] does not turn away from the harsh disappointments of modern life in America. In fact, she is at her best as an explorer of the ways in which we sometimes fail our children and burden them with traumas that blight their adult lives. Still, her storytelling also leaves room for forgiveness, reconciliation, friendship and love.”
—Richmond Times-Dispatch

“Most writers entertain the not-so-secret wish that at least portions of their prose will pop and zing with verbal electricity. But it’s difficult to construct a hook for your average dysfunctional-family story quite as illuminating as when the author herself, and also several of her characters, have actually been struck by lightning. Michele Young-Stone’s first novel blends both true and fictional accounts of cascading storms of the heart and the sky. . . . Death, art, ghosts, love and the search for redemption populate her pages as frequently as the ominous rumble of thunder.”
—Richmond Style Weekly

“Young-Stone tells parallel stories that hurdle storm after storm headlong into one another. . . . [She] is a very fine writer who has created a host of endearing losers—young, old, literate, and simple, all full of longing. What she does best is portray the incredulousness of the unlucky.”
—Publishers Weekly

“Each character in this startlingly mature debut novel, from Becca’s self-absorbed father and self-destructive mother to Buckley’s evangelical stepdad, is complicated, nuanced, and sympathetic. Young-Stone’s writing style is crystal clear and shot through with lightning-like flashes of description so vivid that readers might think that they are watching a movie. VERDICT: It’s not often that this reviewer regrets a book ending, but that’s what happened here. The sense of melancholy, tempered by the resilience and heart of the characters, makes this ripe for Oprah or fans of Elizabeth Berg or Anne Tyler.”
—Library Journal (starred review)

“Luminescent . . . Becca and Buckley’s parallel stories, as well as curiosity about how their paths finally converge, will keep the pages turning, while the complex, colorful characters, and the deep bonds that form between them in spite of and even because of the tragedies they survive, will live on in readers’ minds long after they reach the end of this powerful, beautiful novel.”
—Booklist (starred review)

“The Handbook for Lightning Strike Survivors is a quirky, intelligent, funny and well-written book filled with characters so imperfect they look like you and me.” —The Raleigh News Observer

“Vibrant, funny, complicated, magical, heartbreaking, electric. Michele Young-Stone’s debut novel The Handbook for Lightning Strike Survivors is all of this and more. I loved it! I’ve been waiting to read a book like this for years.”
—Sheri Reynolds, bestselling author of A Gracious Plenty and The Sweet In-Between

“If you have anything else to do in your life, don’t open the cover of Michele Young-Stone’s The Handbook for Lightning Strike Survivors. You won’t be thinking about anything except Becca Burke’s amazing life for a very long time . . . ”
—Jacquelyn Mitchard, New York Times bestselling author of The Deep End of the Ocean

“Yes, it’s a book about lightning, but it’s so much more. It’s about the interconnectedness of our stories, our seemingly lonely and individual sufferings. It’s about the strength of the human spirit. It’s about finding redemption where you least expect it. This book, like lightning itself, will take your breath away.”  Our State Magazine